preparing for the worst

This past weekend, I had quite an adventure on the subway on the way to visit some friends. One station before I had to get off, the subway came to a complete halt almost instantly, while we were still in the tunnel. It took an hour and a half, but eventually the train was evacuated on the way and everyone was on their way again -- not the best way to spend a Saturday night: 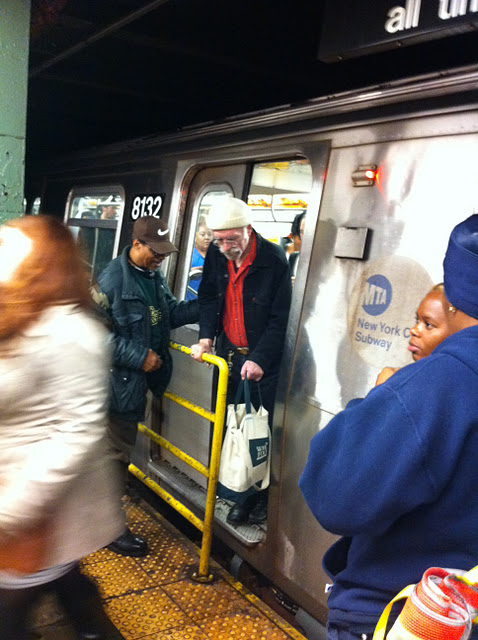 Why did it take an hour and a half for train operators to allow people off of the train, even though the front car was in the station? I think it has something to do with the delegation of authority. It's obvious that the train operators would have let everyone off of the train if they could, but it's likely that they don't have the authority to make a decision like that. That's worrying, because in tough situations, train crews need to be able to make quick decisions to get people out of harm's way.

Incidentally, preparing for emergencies like this is rather difficult -- and most train systems don't do it correctly. Thankfully, no one panicked while we were stuck underground, even though the air conditioning went out and it started getting concerningly hot. In case of an actual emergency, if something happened quickly and there was panic, it would have been even more difficult to know what to do, since the instructions given to passengers are so vague:

While the graphic is posted prominently in the train and is quite simple looking, it conveys very little about what can be done in the case of an emergency. For each of the cases, the action item is the same: notify the crew and wait for instructions. Nothing is actually said about how to contact the crew, however. There are no phones, and there are no directions for how to find an intercom. The way to find the nearest crewmember on the train isn't even shown.

"...I can't stress this enough - if somebody faints or is having a heart attack or whatever on the train, for the love of god DO NOT pull the emergency brake. Doing so is going to KILL the customer, not save him. Now we not only have a sick customer, we have a sick customer who is stuck halfway between stations where EMS can't reach him, and if a passenger pulls the brake, that train won't be moving for at least 8 minutes."

This graphic could be better designed by actually communicating how to notify the train crew, since that is the recommendation in all emergency situations. The emergency brake should be removed, or explained precisely in which situation it should be used next to the emergency brake.

San Franciso's BART train provides another example of poor communication in emergency instructions. The poster communicates very precisely what should be done in each possible situation, even differentiating when the train is stranded on an elevated platform from when it is underground. 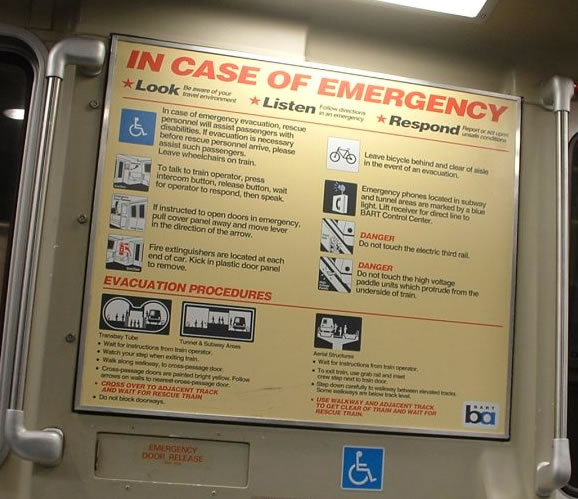 While this precision is great when compared to the vague "notify the crew" of the New York City subway, this poster suffers from the flaw of over-communicating. When people are in a panic, it is incredibly difficult to communicate anything to them, and they will have a hard time remembering anything. Here, some copy editing would go a long way. Emergency phones are marked by a blue light? Great. No need to tell people to lift the receiver to get a connection: they already know how to use phones, and won't even remember the instruction once they've left the train.

Generally, good systems for emergency situations involve simple, clear instructions on what to do. The best systems don't even require much communication at all -- for example, in modern building construction, most stairways exit into the lobby on the ground floor, even when there are basement levels in a building. The reason for this is that when panicked, people would run all the way down the stairs, and would miss the ground floor in their haste, causing an even more dangerous situation with people trapped in the basement. One possible answer would have been communicating on the doors -- this is the exit. But by defaulting the stairs to exit at the ground level, no communication is necessary for emergency situations where every moment counts.

I'm glad my train "emergency" ended up not being a big deal at all -- but there is a lot designers can learn from the mistakes made by train systems to make their own systems more easy to use in dire situations.

when creativity kills the message text editors for writers