Most writers I know use Microsoft Word for their writing and editing. It's a wonderful piece of software that truly revolutionized what word processing meant, making it easy and intuitive for anyone to start creating documents on their PC. But what I don't fully understand among writers is why they choose to stay with the clumsy and bloated Word for writing purposes, when there are far more effective and efficient tools available for writing text.

To contrast with most writers, employees in some industries really learn to use the best tools. When one of my friends was starting a summer internship in finance, she was sent an excel workbook before her start date, with the sole purpose of learning as many Excel shortcuts as possible. Truly effective financial analysts are defined in part by their mastery of fast spreadsheet manipulation -- the most advanced even write macros to automate their most common tasks.

But Word lacks anything beyond the most rudimentary keyboard shortcuts. It's somewhat inefficient to manipulate text using the mouse while writing because it requires the writer to constantly switch between having both hands on the keyboard and having a hand on the mouse. By keeping the hands on the keyboard at all times, it's almost always faster to quickly write and edit without lifting one's hands away, provided that there are a smart set of keyboard commands (here is some discussion ). This means not even using the arrow keys (since they aren't at the ASDF, JKL; keys where you should have your hands when touch typing).

Word is also overloaded with features that most writers will never use. It's a swiss army knife with endless blades and gizmos that never get folded out.

This is why I am puzzled more writers don't take advantage of text editors built for efficiency that are popular among computer programmers, such as vim. These tools are much more like precision scalpels than swiss army knives: 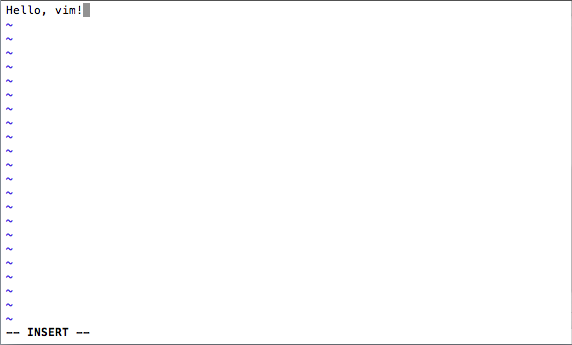 While the user interface may seem barren, vim is tremendously powerful for manipulating text. The defining feature of vim is the presence of different modes , which separate out the insertion of text into a document from the navigation, selection, and edition of text.

Here are some of the reasons I think writers could benefit from using text editors like vim.

Some of these features would undoubtedly be very useful for writers -- so why haven't they caught on?

To try vim out for yourself:

If you're on a mac, open up a Terminal, and type "vimtutor" and follow the lessons to learn some of the basics. You may feel a bit frustrated at first -- don't worry. Using vim is a skill that takes a while to acquire, just like touch typing. While you might be slow at first, the benefits do come eventually.

A good way to go about learning is to learn vim progressively, by building up just enough to do the basics and then picking up more as you go along. This approach is described will in this blog post.

If there is enough interest, I might make a set of tutorials for non-technical users so they can learn how to use tools like Vim. I think there is a tangible benefit for anyone who spends considerable time typing and manipulating text on a computer.