strapping a GoPro to a skateboard

A week or two ago I bought a GoPro Hero HD2 camera, having seen tons of videos online of people recording shenanigans like skateboarding, biking, and skydiving. GoPro has done a tremendous job of promoting its products through YouTube, both creating its own series as well as encouraging the community to upload their best content.

While it's easiest to attach the camera to a helmet with the included straps, I decided to take it for a spin by mounting it on the bottom of my skateboard. With a little bit of duct tape I was good to go: 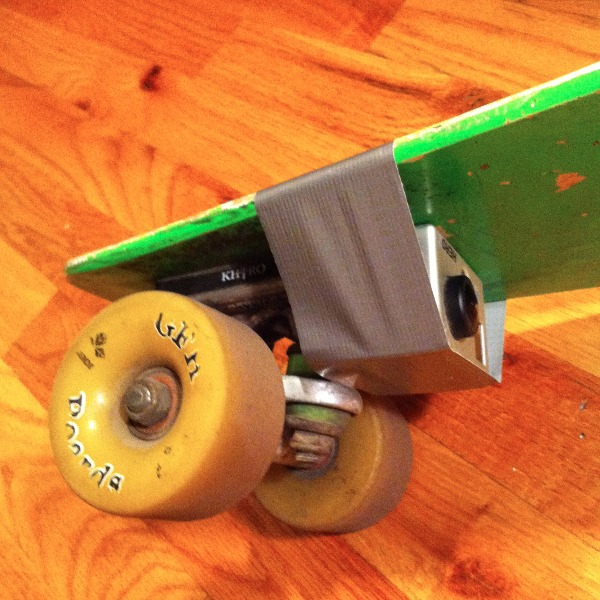 With this setup, the camera isn't in the protective case, although there is enough ground clearance that it won't get damaged. It made for quite a fun ride and the resulting video of a cruise through Central park is pretty neat, especially since the wide angle of the lens captured a lot of the surroundings and passerby.

New York City is pretty dirty, and after half an hour there a fair bit of dust accumulated on the lens, but after wiping it off it returned tip-top shape.

The camera is particularly striking in its simplicity -- a single button on the front is used to turn it on, and another on the top starts and stops recording. There's even a setting to automatically record whenever the camera is on, reducing the time it takes to start capturing video.

The focus of the product is content creation, not consumption, and so the manufacturers had to make some tradeoffs in that direction. There is no way to preview anything captured, but this is a good thing because if they added an LCD that component would be likely to break anyways. Configuring settings is a little bit tricky too, since there aren't many controls for navigating around the menu, but thankfully the default settings are good enough for most people most of the time.

Overall, I'm really glad I got this. I'm looking forward to capturing fun stuff in the future with this camera -- you should buy one too if you have ideas for cool video to capture and share!

does Pandora's business model undermine itself? communicating without saying anything